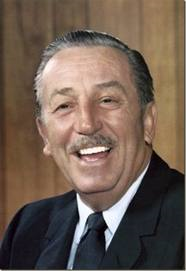 Walt Disney (1901-1966) transformed the entertainment industry as he created some of the world’s most well-known and best-loved characters. Believing that adults deserve to have as much fun as children, he sketched cartoons, produced more than 100 movies, and built a theme park that remains the benchmark for all the planet’s playgrounds—Disneyland. He received more awards and nominations than any other individual in history. He and his staff of cartoonists, movie-makers, and Imagineers were recognized with more than 950 honors and citations from around the world, including 48 Academy Awards® and 7 Emmys®. Known as “the Man Behind the Magic,” he saw a world of possibilities through the eyes of an innocent child. If something can be imagined, he believed, it can be made real.

When I see things I don’t like, I start thinking,

“why do they have to be like this, and how can I improve them?”—Walt Disney

Through the Eyes of a Child

A castle, and a handsome prince upon a silver screen.

Pictures came alive because a master of the arts,

An animated man created a whole new world that won our hearts.

He could see what was fun,

And he brought that vision to everyone.

His work was his play. The joy ran wild.

Oh, the magic he saw through the eyes of a child!

In spite of what the critics said, he made it all appear.

A dream come true, his kid’s-eye view made him the first Imagineer.

Somehow, he captured the feel,

Because his mind of make-believe

Made anything possible and everything real.