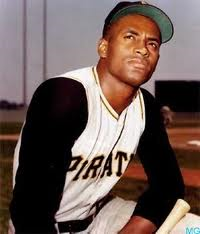 Roberto Clemente (1934-1972), “The Great One,” was Puerto Rico’s most popular sports figure and the first Latino elected to baseball’s Hall of Fame. He won 12 straight Gold Glove Awards and 4 National League batting champion titles. Twelve times he was named to the All-Star team. He was Most Valuable Player in the National League in 1966 and Most Valuable Player in the 1971 World Series. His .317 career batting average was the highest among all active baseball players. A committed humanitarian with a passion for family and the welfare of children, he challenged racial discrimination while helping the less fortunate. He lost his life while attempting to fly relief supplies to earthquake victims in Central America. Recognized as baseball’s first Latin American superstar, he believed it is not enough to play the game well. One must always give back.

If you have a chance to help others and fail to do so,

you’re wasting your time on this earth.—Roberto Clemente

Such an eager little boy,

Broomstick for a bat,

Tin can for a ball—

Not much more than that.

One day he gave that ball a mighty whack,

Far from the sugar fields of San Juan

He played the game,

It was his kind and giving heart

That keeps him in our Hall of Fame.

Takes off in the rain.

He knew there was a risk, but he had to go

On a mission of mercy—he couldn’t say no.

Now, far from the sugar fields of San Juan

The legend lives on.

And passion in the ways he played.

“He was a Superstar!” they all declared.

Remembered as theman who cared.