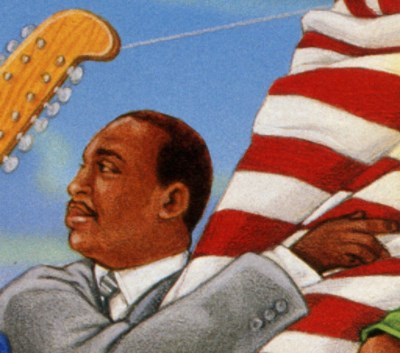 The Reverend Doctor Martin Luther King, Jr. was one of America’s greatest African American leaders, and February is Black History Month. But there two additional significant reasons for honoring King this month. On February 25, 1948, he was ordained as a Baptist minister at the young age of 19.
And then there was his life-changing spiritual journey to India…

While studying to become a minister, King attended a Sunday sermon in Philadelphia by Dr. Mordecai Johnson. “Dr. Johnson had just returned from a trip to India,” wrote King, “and, to my great interest, he spoke of the life and teachings of Mahatma Gandhi. His message was so profound and electrifying that I left the meeting and bought a half-dozen books on Gandhi’s life and works.”
On February 3, 1959, the 30-year old and his wife Coretta embarked on a month-long mission to India to walk in the footsteps of his hero, Mahatma Gandhi. The American Friends Service Committee helped arrange the tour.
In India, King travelled to institutions associated with the life and work of Gandhi, saw some of the leading centers of academic learning, and met with Gandhi’s spiritual successor, Acharya Vinoba Bhave. He also met with India’s Prime Minister, Nehru.
King returned to the United States more determined than ever to preach nonviolence, believing it is “one of the most potent weapons available to oppressed people in their quest for social justice.”
It was the writings of Gandhi that inspired King to believe it is possible to resist evil without resorting to violence. King learned how he could be most effective by nonviolently working to end racial discrimination and war. He wrote, “My study of Gandhi convinced me that true pacifism is not nonresistance to evil, but nonviolent (my italics) resistance to evil. Between the two positions, there is a world of difference. Gandhi resisted evil with as much vigor and power as the violent resister, but he resisted with love instead of hate.”
After arriving home, in his first sermon at Dexter Avenue Baptist Church, he noted that Abraham Lincoln and Gandhi had each been assassinated attempting “to heal the wounds of a divided nation.” He concluded, “God grant that we shall choose the high way. Even if it will mean assassination, even if it will mean crucifixion, for by going this way we will discover that death will be only the beginning of our influence.”
Could Martin Luther King, Jr. have known that day that his own life’s work would someday be compared to both men?