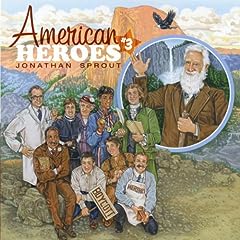 This is actually the third album in a series by the wonderful and award-winning talented singer/songwriter Jonathan Sprout. The American Heroes Series is a collection of original songs that teach children about some of America's greatest citizens.

"American Heroes" won critical acclaim and awards from The National Association of Parenting Publications & Parents’ Choice as a groundbreaking CD in the field of educational children’s music. A sequel, More American Heroes, has been awarded The Film Advisory Board’s Award of Excellence and Parents’ Choice Awards. And American Heroes 3 is the iParenting Media Award '2009 Best Products' Winner!"

This is a must have for teachers--and I will be giving one to my son's Kindergarten teacher when he starts this Fall! It is simply awesome. And I say this not just because of the fun upbeat music that gets toes tapping and hands clapping, nor because of Jonathon's wonderful singing, al but for another reason.

We first listened to the cd with my two year old. And both boys together listening to fun lively music tends to result in lots of laughing, clapping and dance moves that would make Michael Jackson jealous (just saying....).

But I really wanted my older son to listen to the words in the songs and the stories being told. So when my two year old went down for a nap, I put the music back on, and called my son to join me. Now he and I do reading, coloring, counting and all the normal kinds of educational activities parents do with preschoolers, but I never really discuss history with him.

This is why I not only love this album, but am so greatful it arrived in our mailbox for a review! We sat on that couch together and talked about the different 'heroes' that Sprout sings about. How some overcame great challenges to be successful, and how nice it is to want to help others. Learning through music is perfect for kids, and I loved how my 4 year old responded to the songs. But I can also imagine this album being perfect for elementary school children of all ages.

The "heroes" on this collection are Jane Addams, Elizabeth Blackwell, George Washington Carver, Cesar Chavez, Milton Hershey, Thomas Jefferson, John Muir, Pocahontas, Wilma Rudolph and Jonas Salk. I admit I needed some brushing up on my history as well-- and learned a few things myself listening to the songs!

My son was fascinated of course with Milton Hershey or as he is known in the song, "Chocolate King." He was also very interested in "Peanut Man," better known to us as George Washington Carver. I was struck by the story of Wilma Rudolph, beautifully told in the song, "Can't Stop Running," which I hadn't known before.

I could go on and on about this album, but it may be better for you to check it out yourself!