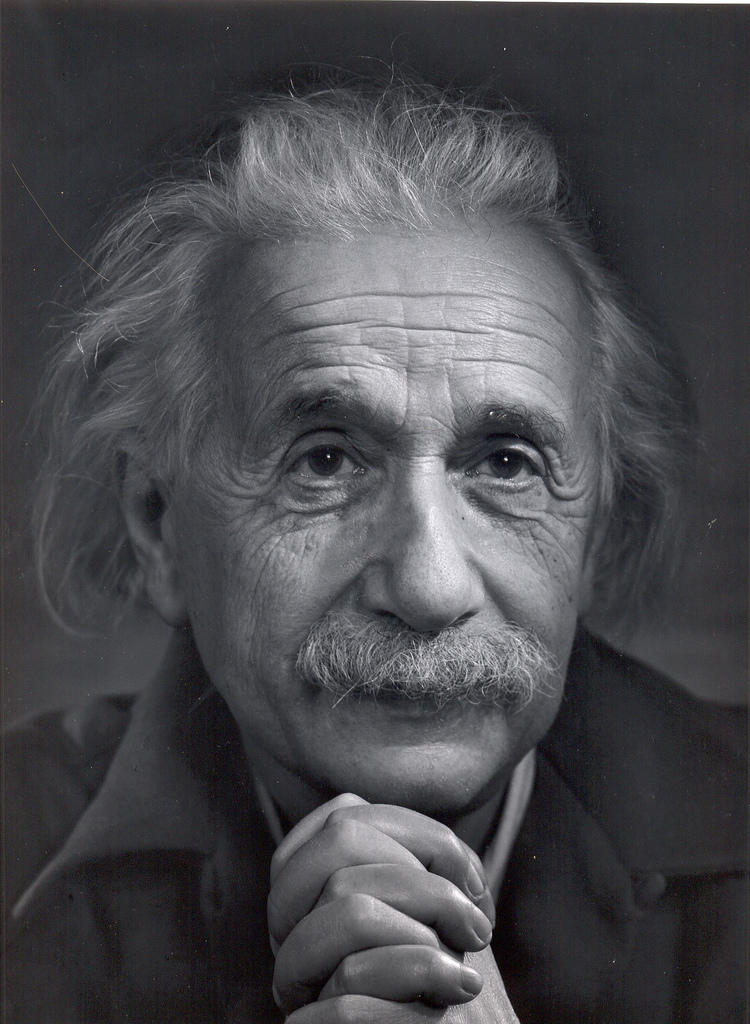 Albert Einstein (1879-1955) is considered the most creative scientific genius of modern times. He questioned the obvious and marveled at nature's mysteries while changing our understanding of the world. “Imagination is more important than knowledge,” he said. He was a master of both. He forever changed the laws of physics with his formula E=mc2, proving that energy and mass are different forms of the same thing. A kind, gentle, and absent-minded professor who rarely wore socks and seldom combed his hair, he became one of the world’s most visible supporters of peace and human rights. He was awarded the Nobel Prize in Physics in 1921 and named Person of the Century by Time Magazine in 1999. His name is now another word for “genius.”

Learn from yesterday, live for today, hope for tomorrow.

The important thing is to not stop questioning.—Albert Einstein

He was a simple man of curiosity

Who took a second look at what no one else could see.

He followed logic along imagination’s path.

With ever-twinkling eyes beneath that crazy hair,

He saw a universe of questions waiting there

And found the answers to nature’s mysteries using math.

A simple desk and chair, an out-the-window stare,

Crumpled papers in the trash,

A brain that could not quit, and scientific grit,

Then in a flash…

Even Einstein was not prepared

For the formula that loudly declared he was a genius!

It was this dreamer who found the key

To a secret so we all could see

The true definition of energy.

His violin was handy. Sometimes you can’t resist

A bit of fun distraction when you’re a physicist.

The man knew everything, but kept his brilliance in disguise.

He said he had no talents, yet he was born to think.

Knew how to fix equations, but not the kitchen sink.

Became a pacifist and won a Nobel Prize.

A formal dinner tux, applause, and lots of bucks—

Everybody screamed his name.

It was his work with light that made his day that night.

Multiplied by mass. What would that be?

Physics ~ a branch of science that deals with matter (a physical substance that occupies space) and energy (what is required to perform work). Einstein was a physicist. He was an expert in physics.

Absent-minded professor ~ someone who is often forgetful or inattentive. Einstein was often so engaged in what he was thinking that he did not pay attention to the things going on around him -- and he was constantly thinking! He was filled with curiosity, and he was always asking questions.

Nobel Prize ~ an international prize awarded each year in the fields of physics, chemistry, physiology or medicine, literature, economics, and the promotion of peace. The first Nobel Prize was given in 1901. Einstein’s Nobel Prize was awarded for “his services to Theoretical Physics, and especially for his discovery of the law of the photoelectric effect,” not for his Theory of Relativity.

Genius ~ a person who is exceptionally intelligent. Einstein was considered a genius. If you say someone is “an Einstein,” you mean he/she is really, really smart!

Scientific grit ~ perseverance and passion for long-term goals. Einstein was willing to stick with something until he came up with an answer. He was passionate about the field of science, especially physics.